Skip to content
Home/Blog/The Biggest Pitbulls In The World

The Biggest Pitbulls In The World

I’m pretty sure if you’ve been on the internet or watched the news the past couple of months you probably came across Hulk from Dark Dynasty K9’s. All of the media has been saying he is the biggest red nose “pitbull” ever to exist, he weighs in at a staggering 174Lbs everyone I know was saying he is the biggest pitbull to ever exist. There has been a lot of controversy about him being a pitbull and if he’s really the biggest. All this debate has really got the conversation going of how did the pitbull breed get so big? Today I am going to say some things that a lot of people will not agree with. I decided to publish this article months after he became famous because I did not want to take anything away from the hard work his owners have done with him but at the end of the day as a breeder I thought it was time to say my opinion. Also a lot of people have asked me my thoughts about this subject but I never wanted to say my comments till I had some time to actually sit down and write a couple thousand words about this very controversial subject. So I hope no one takes my honest opinion personal but if your one of those people that complains about everything someone says well that is to d**mn bad and I don’t have time to listen to people b**ching so listen up because I am only going to talk about this once. 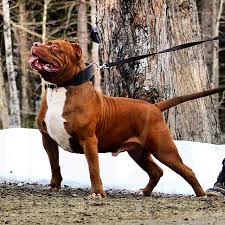 First off DDK’S Hulk is not the biggest bully pitbull of all time, he actually is not even close. Hulks father Ghostface comes from a guy named Jack Ellis who has multiple dogs the size of hulk and most of the general public does not know about him but in the breeder world everyone knows him. He has a stud that is named Kekoa and he sits well over 200 pounds, Jack is over the kennel called Northwest Working Giants. Hulk has gained a wide amount of media attention the past couple of months as being the biggest pitbull. This isn’t correct at all and most people have been questioning if he is a true APBT but to me I never even knew this was a question whether he is a APBT or not. I am here to say to the people that have been on the fence about him being a pitbull or maybe you just really do not know that none of these dogs pictured are true American Pit Bull Terriers even the dogs I own are hybrids of the original breed. With having a lot of controversy over this subject and how he has more of a mastiff look to him than your average pitbull does, it should be obvious to what he is. I would say from a breeders perspective on the Hulk, he is an amazing specimen if you ask me and have nothing but respect for his owners but he has too much loose skin for my style of pitbull. If you go back on his pedigree the Hulks Dad is named Ghostface who was actually bought from a Kennel up In Washington that has been breeding dogs for a lot of years called North West Working Giants. But what most people don’t know that the bloodline the hulk came from has already created another dog that is over 200 pounds and the hulk is not even close to this dog in size.

Another dog that is bigger than the hulk is my good friend Gina from Rhode Island. Azore one of the biggest bully pitbulls in the breeding world has been videoed with being weighed on a scale at around 195 pounds. The kennel that owns him is called XXL Designer pitbulls, he is the biggest son from Sunlines Gladiator Rock or more commonly known  as “ BGK’S The Rock.” The owner of the rock is named Andre but what most people don’t know is the Rock is not actually part of the BGK Bloodline. He was never produced by BGK but that still does not take away from the overall popularity and productions from the BGK Kennel. The United Kennel Club was the first registry to recognize the American Pit Bull Terrier as a breed clear back in 1898 which most people were still riding around on horses. So in my honest opinion just how our way of travel has evolved and you no longer see your friends going to the grocery store by riding a horse our pitbulls have evolved from the original definition of an American Pit Bull Terrier. The breed as defined by the United Kennel Club is “The American Pit Bull Terrier is a medium-sized, solidly built, short-coated dog with smooth, well-defined musculature. This breed is both powerful and athletic.” as no doubt these dogs are powerful, and seems to be somewhat athletic they aren’t medium-sized dog.  Over the past 25 years these dogs have drastically been changed by breeders selecting the traits of a dog they desire to have by mixing other breeds into the genetics. By mixing other breeds into your original APBT  this has sped up the evolution of the XL Pitbulls. How else could a dog that varies from 45-60 lbs go clear up to 200 lbs, it’s simple through crossing pitbulls with other big dog breeds like mastiffs and bulldogs. The result of these breedings are members of the pitbull family that have reached weights and size no prior pitbull advocate would of imagined possible. The new bully breed that has evolved is a lot bigger and wider than the creators of the orgianl APBT ever desired.

Everything Gets Better Or It Ceases To Exist

The APBT and XXL Bully Pitbulls both have noticeable differences in size and body portions. So yes folks 99% of these so called pitbulls are not even real American Pit Bull Terriers even including my dogs but you also have to keep in mind the APBT was created by mixing the Old English Terriers with the Old English Bulldog. What breeders are doing now is the same thing people did to start this breed and I honestly think the Modern day XL Pitbull is better than it ever has been in history. The easiest way to understand this concept is by looking at our modern society everything gets better or it ceases to exist. Do you see anyone driving the original Model T Cars around? No because our cars have evolved since than and they are better in any way shape or form. So you can hate these new dogs all you want but the reason people will pay 10k for a puppy is because you can’t find something like two of my dogs pictured below walking down the street. I wanna end it this article with my last point, I don’t think any of these XL Pitbulls are True American Pit Bull Terriers I honestly think they are better. I like my dogs to be in the 90 to 130 range because I am trying to keep the drive, athletic ability, movement and more of the traits the originals APBT had.  Once you start getting up in the 200 pound range your dogs have more health issues, slower and I know they will not live as long as a 90 pound red nose. I would rather have a Lebron James that is 6 8″ weighing around 260 pounds and moves like a cheetah than a 7 6″ Yao Ming who has a very short career because of having so many health issues.  To me it is all about finding the best of both worlds because being too extreme one way or another the body can’t handle moving like that for a whole lifetime and especially doing extreme activities. Lebron James is a great example of the perfect balance of size, speed, agility, strength and as a breeder that is the type of dog that I like. I don’t just want the size I want the whole package from top to bottom and I still don’t think anyone has created that yet.